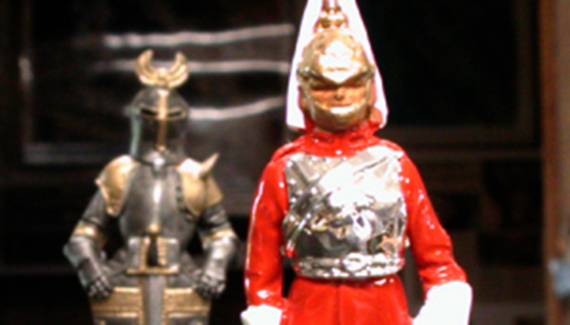 Without going all scientific, depth-of-field is an optical characteristic of lenses which can provide more apparent image sharpness by using smaller apertures. Roughly speaking, depth-of-field is a zone approximately one third in front of, and two thirds behind, the point of focus.

The rules of depth-of-field are as follows. The smaller the aperture, the greater the zone of focus. Conversely, the wider apertures produce less depth-of-field.

Depth-of-field is greater in shorter focal length (wide angle) lenses, less in telephotos. As the subject (point of focus) gets closer to the camera, depth of field decreases. Here’s an example. I used a tripod and manually focused on the Guardsman, set my CP990 to Aperture mode and opened the lens to its widest: f:2.5. As can be seen, the Guardsman looks pretty sharp (I find it difficult to use the Nikon’s manual focus) but the knight is a blur on the background. The second shot was made with the lens set at its smallest aperture of f:9 and no change in focus. Depth-of-field takes over and brings the knight into much sharper focus and even reveals more of the background detail. Hand holding the CP990 outdoors in its Macro mode, I focused upon the nutmeg blossom with the macro setting at its optimum focal length (about equivalent of 50mm). Since it was a bright day, the Auto exposure mode stopped the lens down to its smallest aperture. As the shot above shows, even a macro photo a lot of background detail due to depth-of-field. Next week, we’ll examine some of the ways depth-of-field can be put to use creatively.