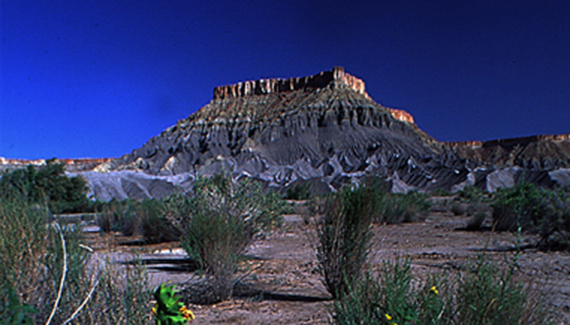 Last week we examined the nature of depth-of-field. Now let’s take a look at how depth-of-field can be applied practically and creatively.

Digital photographers are at a slight disadvantage in that our lenses do not have the small apertures found in 35mm film lenses. For instance, my 990’s smallest aperture at its widest angle is f:7.0. Most 35mm wide angles stop down to f:16 while f:22 is not uncommon. The wide angle is supposedly a favorite for landscape photography for its ability to capture a greater expanse. While this is true, it also tends to make distant objects appear smaller, often defeating the purpose of the photo.

In a Utah desert, I saw this metallic-looking butte just a hundred yards off the road. I hiked a few yards to get closer and eliminate roadside clutter and came across this little wild sunflower (I guess… botanists, please don’t write) about a foot high.

Using a 24mm lens, I set the camera to Aperture-preferred and chose the smallest aperture. Then I squatted to bring the flower higher in the foreground. Although the butte is the point of focus, depth-of-field brought the flower into sharp focus and completed my composition. Of course, using a small aperture requires a long shutter speed to obtain proper exposure. This can be very useful in photographing water. My friend Dave Huss made this shot of an Austin, Texas, waterfall using a Neutral Density filter, a small aperture and an exposure of 1/2 second. The result is a soft, gauzy waterfall blurred by the movement of the water during the long exposure. This technique is terrific in a deep woods setting, allowing water to become a plastic shape around a stationary object such as a leaf on a rock in the stream. Here’s a last example where depth-of-field doesn’t apply. This night shot of the Potomac River from the heights of Georgetown would have received a proper exposure of about 1 second in the Auto mode. By switching to Aperture-preferred mode and its smallest aperture, the exposure time lengthened to about 8 seconds.

This long exposure allowed light sources such as automobile headlights and taillights to paint their trails on the image. The crowning glory is the departure of a jet from Reagan National Airport, completing an otherwise flat composition.