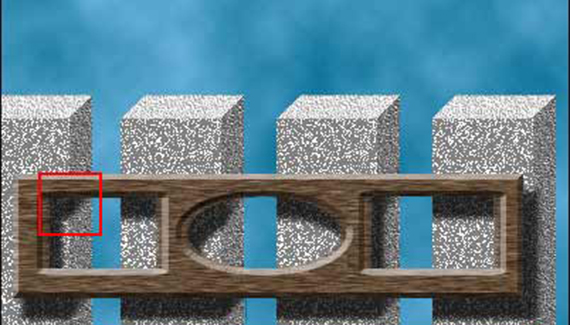 Sometimes a drop shadow needs to fall on only part of the layer or layers below. Perhaps the shadow should fall on the content of the layer immediately below, but not the layer below that. You’ll need to convert the drop shadow layer effect to a layer of its own, then edit that layer. In this example, the shadow of the foreground object should fall on the “pillars” but not on the “sky” behind. We’ll need to convert the drop shadow layer effect into an actual layer and then mask (or erase) the areas of the shadow that should not be visible. As you can see in the layers palette, this artwork consists of three layers: The top object, with both a Drop Shadow and a Bevel and Emboss applied as a layer style; a middle layer that contains the four “pillars;” and a Background layer with a “sky.” Using the menu command Image> Layer Style> Create Layers, we can convert the layer style elements in to actual pixel-bearing layers. (You’ll generally be notified that some aspects of layer styles cannot be retained through the conversion. If in fact the image’s appearance changes, you can use Edit> Undo to restore the layer style.)

In the Layers palette, note that the new layer “Layer 1’s Drop Shadow” was created below the original layer, while the shadows and highlights of the bevel were added above the original layer. Also observe that immediately after creating the layers, I linked them to the original Layer 1. This prevents accidental misalignment of the elements, which could lead to an unwanted (but rather interesting) mis-registration effect. NOTE: For the purposes of this tutorial, I used the Create Layers command after applying a drop shadow and a bevel. In a normal workflow, I would apply the drop shadow, use the Create Layers command, then apply the bevel as a layer effect to the original Layer 1. This not only keeps the bevel as a “live” effect that can be updated, it simplifies the Layers palette and prevents any unwanted misalignment of elements.

To edit the drop shadow, we’ll use a layer mask rather than simply erasing the unwanted areas of the drop shadow. In this case, the menu command Layer> Add Layer Mask> Hide All is appropriate, which adds a layer mask that’s completely filled with black. With the selection active, we can fill with white to reveal those areas on the drop shadow’s layer. Creating and Duplicating a Layer Mask