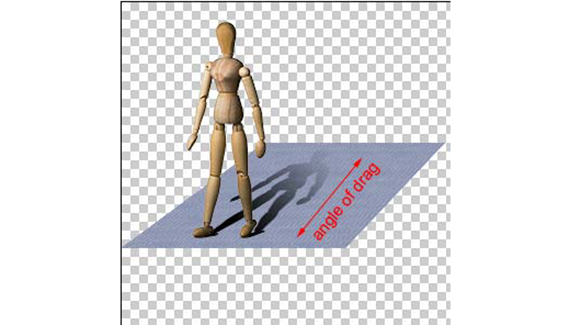 Shadows are a part of everyday life and, it sometimes seems, a part of most images we see in print or on the Web. There are two major categories of shadows, and they serve different purposes. Drop shadows are most often decorative in nature, working to enhance an image. Cast shadows, on the other hand, are usually meant to provide realism or depth. Drop shadows are most common with text and buttons, giving the illusion that the letters or the shapes are floating above or in front of a background or image. Cast shadows, on the other hand, are typically created for objects that stand on their backgrounds. An example would be a person standing on a floor. Both drop shadows and cast shadows can (when applied properly) add depth to an image. Both can add that 3D effect we often seek. To determine which to use, consider whether the foreground object, the subject, is parallel to or perpendicular to its background. When the foreground and background are parallel, use a drop shadow. When the subject is standing on the background, use a cast shadow. Drop shadows are easy — so easy, they’re almost automatic. In fact, they ARE automatic. Use the menu command Layer> Layer Style> Drop Shadow. (Remember that a drop shadow cannot be applied to a background layer. In the Layers palette, double-click the layer name “Background” and rename the layer. Also keep in mind that you’ll then need to use the command Image> Canvas Size to expand your image so that the shadow has some place to fall.)

1. Add or create the subject on a new layer.

2. Command-click (Mac) or Control-click (Windows) on the layer’s thumbnail in the Layers palette to make a selection of the content of the layer. NOTE: If the subject is translucent, such as a glass filled with beer, you’ll want the shadow to carry a tint of the subject’s color, as shown in PhotoSpin’s Image #0020079.