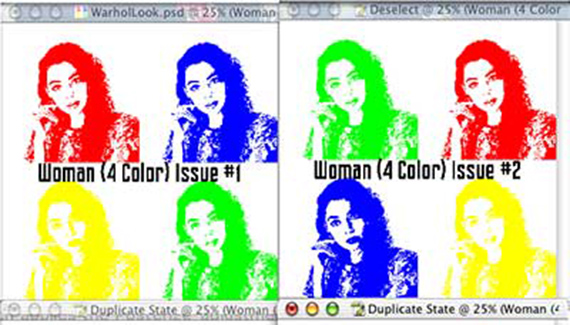 Photoshop makes it easy to create a single image that contains different versions of the same original. In this example, we’ll borrow a page from Andy Warhol and create four different monotone versions of a photograph, combined into a single image. Start with an image, just about any image. We’ll use PhotoSpin’s image #0370029 by Robert Meyers. Using Photoshop’s File> Automate> Picture Package feature, we can add four copies of the image to a single page. Uncheck the “Flatten All layers” option. For each of the Hue/Saturation adjustment layers, click on the Colorize box and select the color you want to use. In this image, observe that the top sample shows blue and cyan, the middle example has blue and magenta, and the bottom image contains only blue.

If you’d like, you can apply this same technique to an image with a single image layer. Use four adjustment layers, each with a layer mask restricting that adjustment to one quadrant of the image. (This can substantially reduce file size.)

Best of all, it’s easy to make simple changes to adjustment layers and create different version of this artwork. Re-open the adjustment layers and change the settings, keeping the same basic artwork, altering only the arrangement of color or the colors used. Give each a new name and consider it a new piece of artwork. And, when you think about it, this may be the most Warhol-esque aspect of this entire project.

From Brunette to Blond