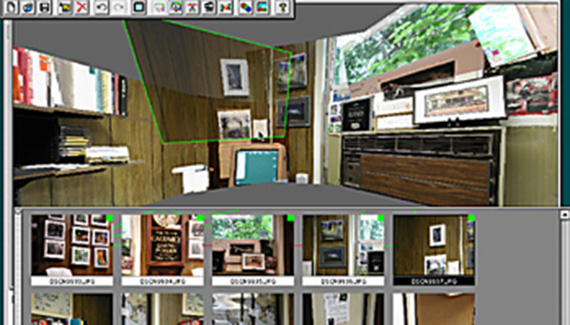 After watching Ken’s demos for nearly an hour, I returned to Florida feeling confident I could master Stitcher when my review copy arrived. Confidence overestimated.

Stitcher is an $495 stand-alone application that can create panoramic images up to 360×360 degrees in cylindrical, spherical, cubic, planar and VRML formats.

After tangling with the utterly complex Panorama Tools, the application used by Ken Lyons (see column at http://img.kelbymediagroup.com/planetphotoshop/uploads/images/tutorials/jim19.html), I expected Stitcher to be a walk in the park. And with the basic tutorial, it sort of was: a nice Romanesque temple with lots of straight lines and hard textures. Stitcher uses drag & drop to place elements from the Image Strip into the Stitching Window. I mastered the rotate, roll, zoom and stitch commands pretty easily. Then I came to a “cannot stitch image. Adjust manually.” I might still be adjusting manually if I had not given up and started over.
Oddly enough, my problem image stitched just fine when I started with it as a base image.

Understanding various formats and the focal length and other menu controls is vital to using Stitcher in a masterful fashion. One two-image pano saved as an extremely wide space of black with the tiny image in its center.

A multi-image construction of my studio shot from a stationary tripod and using precise angles and rotations turned out to be a virtual reality strip that inexplicably cropped tightly when saved.

Stitcher is a fabulous program which takes more than a few days of study and practice to attain proficiency. In the coming weeks, I hope to create something that equals the work of Ken Lyons on his worst day.